Angel Grayson is the second Red Lightspeed Ranger, she's the daughter of both Carter Grayson and Dana Grayson and the sister of Heather Grayson.

After the events of Lightspeed Rescue, Time Force team up, Angel was born to Carter and Dana, and she was the cutest little bundle of joy and she had a happy time with her family and was happy that her parents weren't leaving to do something. With her sister Heather, she had a wonderful childhood as well they hung out together and became the best of friends even though some people say sisters don't get along a lot these two did. Angel was at the age of 16 when she was in middle school, her and her sister both watched as the world was being attacked, by aliens and invaded as well but she was surprised to see a new team of rangers defend the world.

One day at the beach she's training with her Uncle Chad and she does well and they're attacked by Cluster bots and Chad and the veteran Rescue Rangers fight them off until it came to Senju of the Thousand hands attacking Carter and injuring him, Angel uses his V-Lancer and fights him off well. As the veteran Rangers are getting beaten back Angel appeared in the red Ranger suit and starts fighting Senju kicking his butt well and her friends and sister arrive and their parents give them their morphers and they morphered into the new Rescue ranger team and been winning ever since. 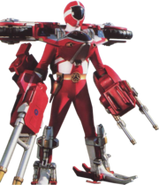 Angel is hot-tempered and very determined. She has a problem with sitting still for long periods of time, but if there is something that needs doing, she'll get it done. She can be sometimes impatient, high-strung and high-energy. Although not as dominating as most Red Rangers, particularly on the field, she will step in when she sees a problem that needs to be solved.

She wears a red jacket with a red shirt and blue jean pants to symbolize her color and she's 5'3 and weights 189lbs and is a 19 year old girl.

Community content is available under CC-BY-SA unless otherwise noted.
Advertisement